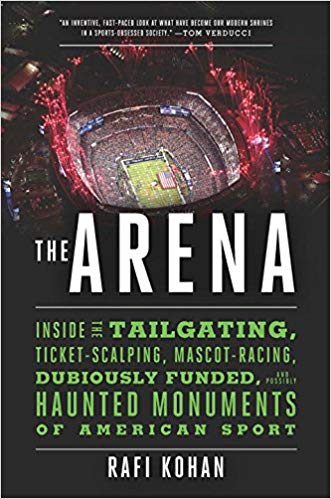 All titles by
Rafi Kohan

The American sports stadium, for all its raucous glory, is an overlooked centerpiece―a veritable temple―of our national culture. A hallowed ground for communal worship, this is where history is made on grass, artificial turf, hardwood, and even ice; where nostalgia flows as freely as ten-dollar beers; where everything thrills, from exploding fireworks to grinning cheerleaders. In The Arena, “an altogether new and riveting sports classic” (Josh Wilker), intrepid sportswriter Rafi Kohan crisscrosses the country, journeying from one beloved monument to the next. As he finagles access to the unexpected corners and hidden corridors of our most frequented fields, he discovers just what makes them tick―and what keeps us coming back time and time again.

Beginning with the “old-timers,” Kohan pays his respects to Chicago’s ivy-laced Wrigley and Green Bay’s lovable Lambeau, which have creakily adjusted to the twenty-first century while maintaining those age-old quirks fans have prized for generations. Juxtaposing these cherished time capsules with mighty new mammoths like Dallas’s shiny AT&T Stadium, Kohan examines the often-punishing realities of how they are built, from architectural ambition to controversial funding and political strong-arming.

Meanwhile, just outside the turnstiles of these commercial cathedrals, whole ecosystems flourish, buzzing with charming merch men and cutthroat ticket scalpers. Trips to Cleveland’s Progressive Field and Quicken Loans Arena illuminate such shadow economies, revealing the remarkable impact a team―and even just a single player (yes, we’re looking at you, LeBron James)―can have on an entire city. With infectious enthusiasm and wit, Kohan also explores the behind-the-scenes logistics and deeply ingrained traditions within these bustling facilities, cracking open a secret world of unforgettable characters―groundskeepers, mascots, halftime performers―who work tirelessly to make the live event worth the price of admission.

If you’ve ever wondered how they coordinate those fighter jet flyovers with the national anthem, how many hot dogs they serve in a day at Citi Field, how boozy pregame tailgates are kept in line, or what on earth AstroTurf is made of, look no further. As rowdy and rollicking as its subject, The Arena is a must-read for diehard fans, shameless bandwagoners, umpires, broadcasters, groundskeepers, culture junkies, tailgaters, and anyone else who’s ever eagerly headed off to the ballpark to catch a game.