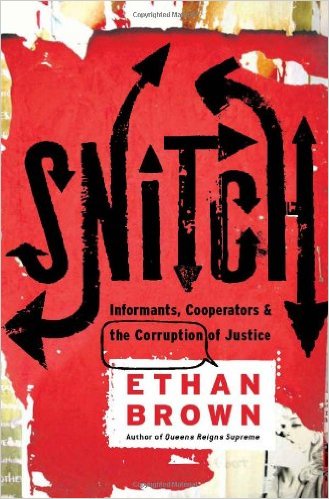 Informants, Cooperators & the Corruption of Justice

In this riveting investigative report, Ethan Brown demonstrates how the War on Drugs has corrupted our criminal justice system.

Real investigative work has been replaced by false testimony from incentivized witnesses, wrongful conviction of innocents, and the premature return of emboldened “snitches” to the streets–where they go on to commit some of the most gruesome crimes imaginable.

How did this happen?  Sentencing guidelines for drug-related offenses have left small-time players in “the game” with few options–except to snitch.  Aided by section 5K1.1 of the sentencing guidelines created in the late 1980s to assist federal prosecutors in building cases, drug defendants will say almost anything to get out of jail.

In Richmond, the brutal murders of two entire families are perpetrated by a onetime crack dealer set loose after providing testimony for the feds.  In Baltimore, Assistant District Attorney Jonathan Luna is found dead after visiting a notoriously ruthless cooperator in jail.  And in Iowa, eager cooperators and informants put an innocent man behind bars for life.

Snitch offers insight into how the use of cooperators is undermining our criminal justice system, and shows that the “Stop Snitchin'” movement is not about encouraging witness intimidation so much as it is a call for hustlers to return to “old school” street values that require doing time for your crimes.  Combining intense knowledge of both the streets and the system with frontline true-crime reporting from cases now playing out in cities including Baltimore, New York, and Richmond, Snitch is a brutally troubling book about the state of American justice.