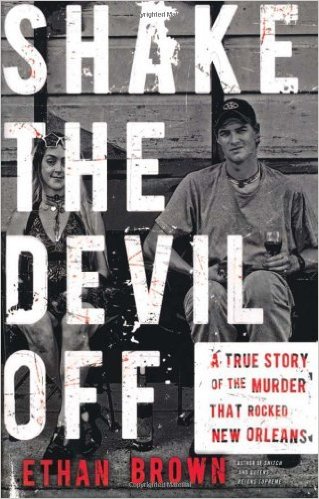 Shake the Devil Off

A True Story of the Murder That Rocked New Orleans

They looked like a slightly mischievous version of the all-American couple, a handsome army veteran and his gorgeous artist girlfriend.  Zackery Bowen–one of the first soldiers to encounter the fledgling insurgency in Iraq–returned to New Orleans to tend bar and deliver groceries.  In the weeks before Hurricane Katrina, he met Addie Hall, a pretty and high-spirited bartender.  Their improvised, hard-partying endurance during and after the storm had news outlets around the world feature the couple as the personification of what so many wanted to imagine was the indomitable spirit of New Orleans.  But Addie Hall had a long history of abuse that colored her world and everyone who entered it.  And Zackery Bowen fell for Addie completely, until his personal demons, unleashed in the desert of Iraq, combined with hers in a perfect storm of violence that shocked even rough-and-tumble New Orleans.

In October 2006, Bowen leapt from the rooftop bar of a French Quarter hotel.  A note in his pocket directed the police to Addie’s body.  It was, according to NOPD veterans, one of the most gruesome crimes in the city’s history.  Why had this well-liked and easygoing soldier done this horrible thing?

Journalist Ethan Brown moved to New Orleans in order to find out what had driven Bowen and Hall to this end, and eventually he discovered their tragedies–like so many others–could have been avoided if the military had not, in the words of Paul Sullivan, executive director of Veterans for Common Sense, “absolutely and completely failed this soldier.”  By telling the story of these lives, Brown gets to the dark heart of two of the biggest debacles of this era.  The result is a deeply investigated, sympathetically told, mesmerizing, and moving tribute to the city of New Orleans, to anyone who has been touched by the signature disasters–foreign and domestic–of this era, and to two victims of these disasters, Zackery Bowen and Addie Hall.