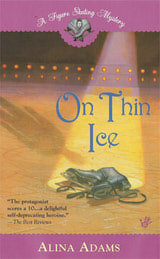 Bex Levy has seen her share of skating stars. But thirteen-year-old Jeremy Hunt may be the best of the best, with his winning smile, flawless technique, and more talent than most skaters twice his age. So, when his strangely protective father refuses to allow him to go to Nationals, and the two vanish, Bex knows there’s a better story off the ice than on.