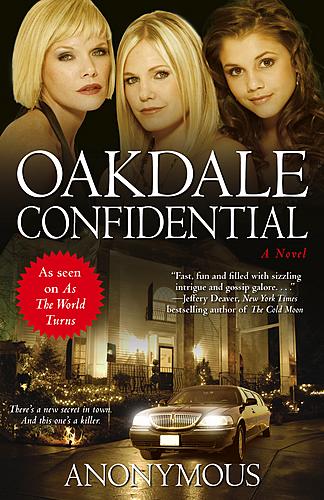 An As The World Turns Novel

It’s a major event in Oakdale — a black-tie gala honoring the Marron family’s fifty years of support for Oakdale’s Memorial Hospital. But high spirits are cut short when patron of honor Gregory Marron Jr. is delivered in his limo dead on arrival, from an apparent heart attack. Three women in the crowd have reasons of their own to suspect murder. . . .

Event organizer Katie Peretti never understood her boyfriend Mike Kasnoff ‘s reasons for not attending the party — until now. After being wrongly implicated in a crime against the Marrons and serving a stiff sentence, Mike has nursed a simmering rage ever since. Maddie Coleman, the teen-aged sister of the limo’s driver, Henry, knows that her brother owed Marron thirty thousand dollars. She also knows he couldn’t pay him back and had only one recourse for permanently erasing the debt. Carly Snyder’s suspicions are more personal. The wife of police detective Jack Snyder, Carly was one of Marron’s mistresses. In a heated moment she wanted her shameful past dead and buried — a wish her husband possibly honored.

Now Katie, Maddie, and Carly, all three of them desperate to protect the men they love, are crossing paths in an investigation that’s uncovering more poisonous secrets in Oakdale than they ever imagined. The means, motives, and suspects are shifting with each new twist — and one of these determined women may not live to see the killer revealed.