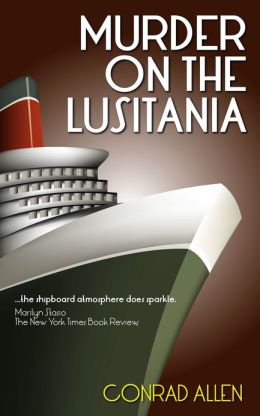 Murder on the Lusitania

September 1907. George Porter Dillman sets sail from Liverpool on the New York-bound Lusitania for its maiden voyage. Hired by the ship’s captain to pose as a passenger, George is in fact sailing the high seas as a private detective for the Cunard Line. While on board, he expects only to deal with petty crimes–some random vandalism and a scuffle or two in the bar, most likely. But then the ship’s blueprints are stolen from the chief engineer’s room and a man is killed in his cabin.

The murder victim is Henry Barcroft, a grating, nosy journalist who’d been covering the maiden voyage for a wire service and making a nuisance of himself among the other passengers. No one would be sorry to see him go, and George Dillman soon discovers that several on board even stand to gain from Barcroft’s demise. Working quickly to solve the crime, George makes an unusual and spirited friend, Genevieve Masefield, and the two uncover secrets about their fellow travelers that prove explosive.

Conrad Allen has created a perfect blend of history, romance, and suspense. By turns delightful and gripping, Murder on the Lusitania beautifully evokes the Gilded Age and introduces us to two of the most remarkable sleuths in crime fiction.

“…the shipboard atmosphere does sparkle. “