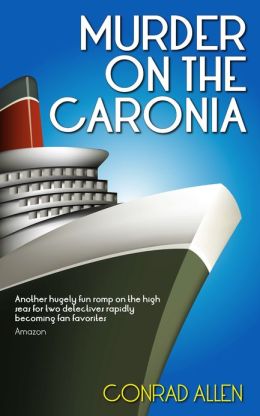 Murder on the Caronia

Genevieve Masefield and George Porter Dillman have met all kinds of people while sailing as ship detectives for the Cunard Line. But as they prepare to embark on yet another Atlantic crossing, this time aboard the famous Caronia, they encounter an entirely new circumstance: two men brandishing shotguns herd a man and a woman aboard ship in shackles, right in front of scores of baffled passengers.

Curious, the two detectives come to find out that the young couple have been captured in New York by Scotland Yard and are being transported back to England to stand trial for murder. Before long, George and Genevieve have a chance to talk to the Scotland Yard officers, and come away far less than convinced that the captured couple are the vicious criminals they’re thought to be.

Of course, no matter how much they’d like to follow up on the hunch that the two may not be guilty, they’ve got a ship full of their standard responsibilities: purse-snatching passengers, stateroom burglars, professional poker cheats, and, of course, drug traffickers posing as high-class travelers. But the hunch just won’t go away, and George knows he’ll just have to find time to check into the situation. All in all, it’s another hugely fun romp on the high seas for two detectives rapidly becoming fan favorites in Conrad Allen’s iventive historical series.