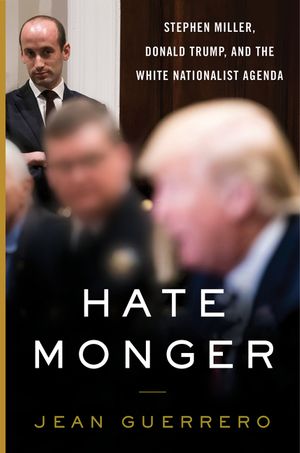 All titles by
Jean Guerrero

Stephen Miller is one of the most influential White House advisors. He has crafted Trump’s speeches, and designed immigration policies that ban Muslims and separate families.

Emmy- and PEN-winning investigative journalist Jean Guerrero charts the thirty-four-year-old’s astonishing rise to power, drawing from more than one hundred interviews. Through backroom machinations and sheer force of will, Miller survived dozens of resignations and encouraged Trump’s harshest impulses. While Trump railed against illegal immigration, Miller crusaded against legal immigration. He slashed refugee admissions to record lows, obliterated asylum and reduced green card access. Miller rallied support for this agenda, even as it triggered humanitarian crises and legal battles.

Hatemonger unveils the man driving some of the most divisive confrontations over what America means, and what it will become.