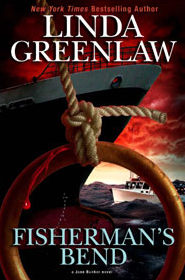 All titles by
Linda Greenlaw

When former Miami homicide detective Jane Bunker left her big city life for Green Haven, Maine, she thought she was also leaving behind the pollution, noise, and dead bodies.Well–as any New Englander will tell you –two out of three ain’t bad.After solving a murder and surviving a couple of attempts on her life (recounted in the bestselling mystery Slipknot), Jane Bunker believes she’s finally earned a respite from murder and intrigue. But if she thinks it’s time for her to soak up the peace and quiet she’s been seeking, she should think again.

On her way back from a routine investigation into some smashed equipment, Jane takes a moment to appreciate the beauty of a Maine autumn–there’s the sublime rainbow foliage of the highlands, the serene reflections of the setting sun on the bay’s gentle waves, the elegant silhouette of a lobster boat on the bay. But her calm lasts only as long as it takes for Jane to make the chilling discovery that the vessel is in serious trouble with nobody aboard–and that its owner has vanished without a trace.

And that’s the least of the mysteries. A young mariner dead of a heroin overdose; the real agenda of a charismatic Indian leader; a missing bait iron and a corpse painted red–nothing is what it seems.

Fisherman’s Bend brings us Greenlaw’s pitch-perfect ear for all things maritime. From the eccentric denizens of little Green Haven–Audrey, the punk rock waitress, the delightful Vickersons with their all-mussel cookbook–to the dark undercurrents that run beneath this seemingly idyllic coastal village, Greenlaw’s flair for combining humor and Down East flavor with roller-coaster suspense makes this a mystery that will grab you hook, line, and sinker.