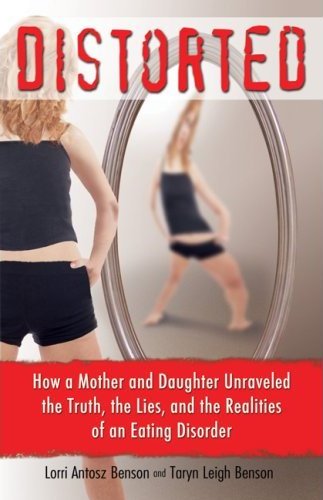 All titles by
Lorri and Taryn Benson

A Mother-Daughter Perspective on Eating Disorders

Mom saw a popular, happy teen, poised to revel in her high school years; her daughter saw a fat, ugly loser, and vowed to take action. One saw glimmers of hope and researched to find the best care; the other had no intentions of getting better and researched new and clever ways to hide her compulsion. Such is the distorted reality in this riveting true account of a teen caught in the grips of an eating disorder and the mother who struggled to help her break free.

Through their gripping dual narrative, Lorri and Taryn Benson take turns chronicling their unique perceptions of events once Taryn was caught in the act of her first purge. With unflinching frankness, they reveal the deceit, the guilt, the shame, and the manipulations that are inherent in this enigmatic disease, unveiling the true picture of what happens to the family dynamic once an eating disorder takes hold. Much more than a cautionary tale, Distorted illustrates the psychological factors that underline the beginning and spread of the disease, the successful and unsuccessful therapies, and the consequences the disease had on themselves and their family.

Triumphantly, the two women share what was ultimately needed to bring the truth to light, providing guidance for anyone struggling with or affected by an eating disorder. Their two stories–woven together as one powerful beacon of hope–will offer insight and comfort to families, spouses, and loved ones who feel helpless and alone.