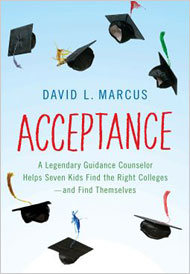 All titles by
David Marcus

The U.S. university admissions process become astonishingly competitive: the need to burnish one’s resume starting in pre-school; the astonishingly high rejection rates among the top-ranked institutions; the enormous pressure placed on students and their families. THE APPLICANTS will tell the story of one high school class, at Oyster Bay High School in Long Island, New York — a town with an economically and racially diverse student body, and a school district that has traditionally paled in comparison to the top-ranked Long Island villages that surround it. Yet thought the efforts of one extraordinary guidance counselor, Gwyeth Smith (“Smitty”), Oyster Bay now ranks among Worth magazine’s top 50 Ivy League Feeder high schools in the nation.

Smitty, in a word, is a superstar college advisor, an oracle to parents, and even to his colleagues at other schools. Through the stories of his work with the seniors at Oyster Bay High, we learn a great deal about how his students get an edge. As such, THE APPLICANTS will not only be a strong work of narrative journalism, but a resource for parents who are immersed in the applications process. It will appeal to the same audience as Jacques Steinberg’s THE GATEKEEPERS and Alexandra Robbins’ THE OVERACHIEVERS.

David Marcus is a Pulitzer Prize-winning journalist with impeccable credentials as an education reporter — first for U.S. News & World Report, and currently for Newsday. Equally important, THE APPLICANTS will play to the same strength that served Marcus so well in his previous book, WHAT IT TAKES TO PULL ME THROUGH: Why Teenagers Get in Trouble and How Four of Them Got Out (Houghton Mifflin, 2005) — his ability to really get to know teenagers, and to write about them in an authentic and compelling way.

“I grade Marcus and “Acceptance” A+ for presenting an engaging, indispensably informative book.”